It wasn’t my intention to write about my 6th great-grandfather this week, I had already written it on my 2nd great-grandmother Estella Rudgely but I’m waiting on happy mail in forms of a few birth certificates, which unfortunately haven’t arrived in time so I’m now going to share with you the story of John Willats.

The Willats family has to be my favourite line, their lives are absolutely fascinating, I can’t wait to share their stories with you.
My 6th great-grandfather John Willats I know very little about as I have only just discovered him within the last month or so. What I have uncovered is just mind-blowing and I need to know more about him, he seems to be a little rascal. Unfortunately he is in the era of parish records, which are extremely hard to trace and clarify. It’s more a guessing game and putting the pieces of the puzzle together.

John Willats I believe was born about 1784 in Middlesex. I have yet to discover his parents.

The first documentation I have for him is his marriage banns to Elizabeth Snowdin/Snowden on the 16th October 1905, Westminster. 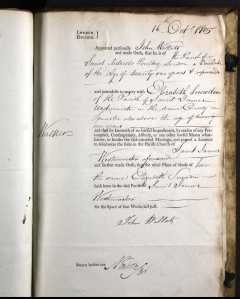 On the 20th Oct her marries Elizabeth at St James, Piccadilly, London, England.

John is an umbrella maker. What a skill to have. How I would love to of seen one of his creations.

John and Elizabeth have a son George William Willats, my 5th great-grandfather on the 20th September 1806  in Bethnal Green.
He was baptised on the 15 March 1812 at St James, Westminster 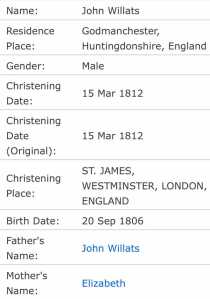 At the present I do not know if they had any other children.

I then find him in the 1807 land tax records for St Anne, Westminster.
His proprietor is named as Duke of Portland. His sums assessed are 4, 3, 4. 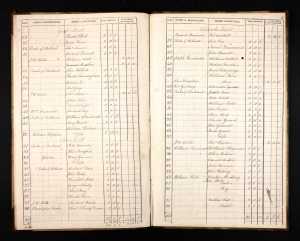 I lose trace of him for a few years until the 29 January 1811, where I find him in a news paper article declaring bankruptcy.

Sadly there are rather a few newspaper articles on him becoming bankrupt. he stuggles he must have been through dont bare thinking about.

The next record I uncovered was an article on from the Old Bailey, London’s central criminal court.

JOHN DREWITT, Theft > grand larceny, 14th September 1808.
JOHN DREWITT was indicted for feloniously stealing on the 20th of August , an umbrella, value 20 s. the property of John Willats .
JOHN WILLATS . I am hard wareman . I live at No. 23. in the Poultry ; between the hours of eight and nine o’clock, on the 20th of August, I saw the prisoner put his hand in the shop and take an umbrella and run away with it; I immediately pursued him, calling out stop thief, a man without his coat; he was without a coat; upon his entrance into Walbook he was stopped; the umbrella he dropped behind him; which was brought to the Compter with him.
Q. Did you see him drop it – A. No; but it was my property that was taken up.
Q. Are you sure that he was the man that you saw in your shop – A. I have no doubt but that he is the man.
Q. When the umbrella was brought back it proved to be yours – A. Yes.
Prisoner. Q. Did not you say when you took me that you was not sure whether it was me or another man without a coat – A. I said I was sure it was you, and I am sure that it is you; he had on a sort of a jacket with light sleeves; I thought he was without a coat, only a waistcoat on, but it proved the next day to be a jacket; I was very sure he was the man.
DANIEL CARTWRIGHT . I am an officer; the man was brought to the Compter; I took him in custody; the umbrella was delivered to me by the prosecutor; I have kept it ever since.
(The property produced and identified.)
Prisoner’s Defence. I was coming down Lombard street at the time the outcry was; I was near the Mansion house door, the people were in a mob; this gentleman came and said I was the man, as I was without a coat; I answered I knew nothing about it; the umbrella was picked up in the road; I asked him if he could swear to me; he said it was either me or another man without a coat; it was dark just about nine o’clock.
GUILTY , aged 23.
Transported for Seven Years .
London jury, before Mr. Recorder.

By 1818 Johns life has taken even a worst turn and he finds himself in Bethlem Criminal Lunatic Asylum. 😫 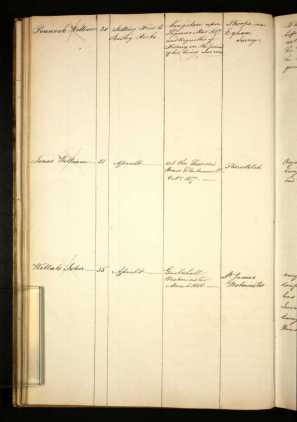 This is confirmed by a second document dated the 28 May 1818 which reads,

Gentlemen, the prince regent having in the name and on behalf of her majesty signified his pleasure that the persons hereafter named should be forthwith removed from the place specified in the accompanying papers, to the building which has been erected by government under your superintendency for the confinement of criminal lunatics , I have the honour to request you therewith in order that such persons may be removed into the said building and there kept in safe custody until the royal pleasure shall then be declared. I have ……. Sidmouth. Willm Jones, John Willats house of correction for the county of Middlesex.

I’ve done a little research on Bethlem Criminal and Lunatic Asylum, it wasn’t a nice place to be. I’m sure he must have been scared at of his wits. Bethlem Royal Hospital, also known as St Mary Bethlehem, Bethlehem Hospital and Bedlam, is now famous, its history has inspired several horror books, films and TV series, most notably Bedlam. You can read more about the hospital here, I for one tho would not of liked to been there.
The hunt continues into more info about why and when, how many times he was there.

Was he really insane?

Little is known about his life after his time in Bethlem and sadly John life comes to end at the age of 53 in May 1836.
His burial took place at 4 o’clock on the 15 May 1836 at Bethnal Green, at the depth of 5 feet.

So that concludes the story of my 6th great-grandfather John Willats for now.
Hopefully I will soon be able to share more with you at a later date.
Until then,

The Life and Times of Florence Nightingale
A House We Built