Family history research isn’t easy, with one brick wall after another, it’s a little like life and all its challenges.
So I thought this week I would do something a little different and share with you one of my hardest ancestors, a women who I am desperately trying to find out about, and unfortunately not getting anywhere.

Her birth would have been before birth indexing and certificates, so I can’t trace her through ordering a birth certificate.
I can not find a christening or baptism in the Stanford Le Hope, as of yet, but as everyone wasn’t baptised or christened, I could be searching for a record that doesn’t exist or it’s well and truly hiding.

And their third Son Alfred Kirby, my 3rd Great-Grandfather was born on the 4th June 1860 at number 3, Dorset Street, Islington, Middlesex, England. 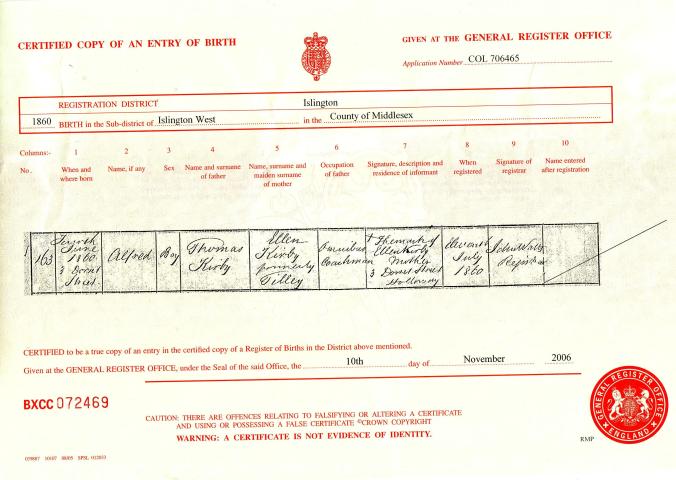 The first census record I have for Ellen is,the 1861 census.
Ellen was living in Islington, London, England, with her husband Thomas Kirby and their 3 sons, Thomas William, Henry John, and Alfred Kirby.

Ellen was 27 years old, which gives a birth year as 1834. She was married, had no occupation and gave her birth location as, Essex, Stanford Le Hope. 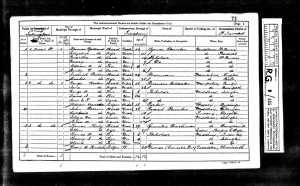 The next census I found for Ellen Kirby nee Tilley is the 1871 census.
Ellen was 36 which makes her birth year about 1835.
She gave her place of birth as, Essex, Stanford Le Hope.
Her husband Thomas Kirby, was 34 and was working as a Bus Driver.

They were residing at 15, Dunford Road, East, Islington, with two of their Sons, Henry and Alfred. Henry was working as a Errands Boy and was 14 years old.
Alfred was 10.

Now this is where things get tricky and the brick wall stands tall, with no sign of breaking.

I’m finding it impossible to find a marriage certificate for Ellen and Thomas.
I found one possibility, for the year 1853, in the December quarter, in the St Pancras, district.

I decided to take a risk and ordered the certificate, hoping that the incomplete record had Thomas missing, unfortunately my gamble didn’t pay off and it was the wrong certificate.

I’ve searched, FreeBMD, Ancestry, Find My Past and Familysearch.org, and I still can’t seem to find a marriage index for them but I staying positive and check weekly just in case records are updated. Fingers crossed I’ll find it one day.

There is no sign of Ellen on the 1881, 1891,1901 and 1911 censuses.
I have found one possible record from her husband Thomas Kirby in the 1881 which only leads to more uncertainty. Thomas Kirby is also a tricky one, as there is more than one Thomas Kirby, born in Hammersmith/Middlesex  around 1831 and you guessed it, the others Thomas Kirby’s are also coach drivers.

The 1881 census, I came across, is for a Thomas Kirby and his wife called Elizabeth R Kirby, who was born in Kent, she was 33, about 8-10 years younger than Ellen and younger than Thomas at the age of 49. Also a step son, called David J Mercer was living with them. 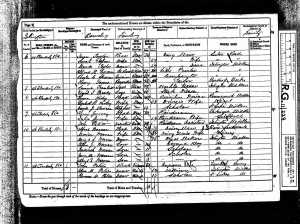 They were residing at 46 Cloudesley Road, Islington. Thomas was a Omnibus Driver.

Could Ellen have died and Thomas remarried ?
I can’t seem to find a death for Ellen, that fits with the location of Middlesex and her age. 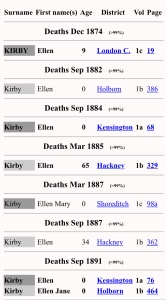 I have however just found an 1881 census for a Ellen Kirby.
She was lodging with a, Mary Ann Kirby, a widow and Mary Ann’s son John.
Ellen’s year of birth is totally different but the place of birth is perfect.

Could it be her ? Could she have given the wrong age or was it a mistake by the administrator ? I’m not convinced but I could be wrong. What do you think?

Anyway back to Thomas Kirby, Ellen husband, did he remarry? Lots of people on ancestry trees, have him remarrying a Elizabeth Mercer nee Mills. I haven’t been able to confirm this, as I can’t trace a marriage at present, which is such a shame as it would clarify if he was a widow.

So that’s all about I can tell you about Ellen Kirby nee Tilley, I have no confirmation of birth, marriage or death. I can only find her in the 1861 and 1871 census and the only fact I can 100% confirm is that, Ellen and Thomas Kirby’s three children.
Frustrating isn’t it.

Where I go from here, I really don’t know, maybe I should try to contact a few people on ancestry and ask if they have any insight about who she really was, where she came from and what happened to her?  I really hope I can crack this one. Wish me luck.

What ever Ellen’s Story was, and even though she is giving me a headache, I really do hope that she had a wonderful life, full of love and understanding.

I have brought and paid for all certificates throughout Intwined.blog.
Please do not download or use them without my permission.
Thank you.