I’ll never forget where I’m from.
It’s essential to remain humble and evolving.

I feel incredibly humble and proud of my roots. Although I wish my ancestors hadn’t lived through hard times, I wouldn’t wish for them to have come from Lords and Ladies. Those amazingly strong people worked incredibly hard, they held their heads up high and they got on with life as best as they could, to me that make them a trillion time better than any Lord or Lady. They earned their pennies honestly and I’m mighty grateful and proud of that. Their skills moved the country on, from dirt roads, candlelit rooms and bedpans. We have a huge amount to be grateful for.
This weeks ancestor, my 4th Great-Grandfather Moses Luke, came from humble unprivileged beginnings, he strived through life giving his family the best he possibly could, as many of us still do to this day. I respect and admire him for giving his best and teaching his bairns, skills, good work efficiency, determination and love.
If we all manage to do that with our own families, life will continue to be humble, honest and respectful as Moses life must have been.

The name Luke is derived from the Latin given name “Lucas”. It is believed the name or any variation of its spelling came to Britain by way of France. French soldiers returning from the Crusades in the Holy Lands are thought to have imported the Latin given name “Lucas” upon their return. The name Lucas is the Latin stylized version of the Greek name “Loucas”, which is topographical; as it was used in reference to a citizen of a region of southern Italy once known as Lucania.
The earliest record of any variation of this surname is that of Euerards Lucas which appears in the Knights Templar Registry in London tax rolls from 1153.
The Luke family name was found in the USA, the UK, Canada, and Scotland between 1840 and 1920. The most Luke families were found in the USA in 1880. In 1891 there were 329 Luke families living in Cornwall. This was about 13% of all the recorded Luke’s in the UK. Cornwall had the highest population of Luke families in 1891.
The most common Luke occupation in the UK was Coal Miner. 8% of Luke’s were Coal Miners. A less common occupation for the Luke family was Agricultural Labourer. Coal Miner, Farmer and Labourer were the top 3 reported jobs worked by Luke.

Now you know a little about The family name Luke, let me tell you the little I know about our very own Moses Luke.

Moses Luke was born about 1766 to Moses Luke and Hannah Luke Nee Grey.
The 1841 census return give his birth location as Hampshire and his birth years as 1761.
Moses death certificate gives his age as 88, which would make his birth year about 1756.

Moses was christened as St. John’s, Lockerley, on the 18th March 1766, if the age on his death certificate is right, he would have been 10 when he was Christened.

In the year 1769, Moses lost not only his Father Moses Luke but all also his mother Hannah Luke Nee Grey.
For some reason, I can not find my source to confirm their deaths, so please do not that this as gospel. I’m sure it’s somewhere in my huge box of paper work.

He would later on marry Sarah Scanes, on the 7 September 1815, at St. Margaret’s, Michelmersh, Hampshire, England.  Sarah was the Daughter of John Scanes and Mary Butler.

Moses and Catherine’s first Daughter was born about 1796.
They named her Sarah Luke.
Sarah, was christened on the 6 March 1796, at St Andrew’s, Mottisfont, Hampshire, England.
She would go on to marry John Collins, son of Robert Collins and Mary Collins nee Dykes, on the 23rd December 1817, at St Mary’s, Michelmersh, Hampshire, England. They traveled to Auburn, Australia, where she passed away on the 20th January 1875.

Moses and Catherine’s 2nd Son, John Luke was born about 1797 in Lockerley. I can’t seem to find a christening for him, only census returns.
He married a lady called Mary Ann. 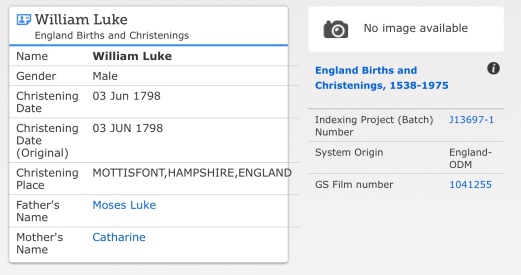 I believe he didn’t marry and was residing at, Carters Clay, Lockerley, Hampshire, in 1841 and was working as an Agricultural Labourer.

In 1799, Moses, may have experienced the shock of having to pay an Income Tax to help the British government win the Napoleonic War. 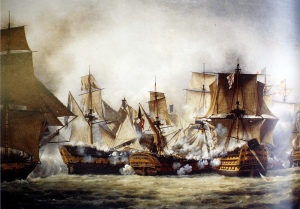 By 1799, the war with Napoleon had taken its toll on England. The British royal treasury was running out of money to maintain the royal army and navy. Soldiers were starving and His Majesty’s navy had already mutinied. For Prime Minister William Pitt the Younger, the solution was simple: impose an income tax. Under the Act of 1799, all citizens who earned above £60 were to pay a graduated tax of at least 1 percent. Those with an income of over £200 were taxed 10 percent. Not everyone agreed with Pitt’s new economic policy. The wealthy, the manufacturers, and merchants all decried the measure as intrusive. But other citizens viewed the tax as a patriotic duty, if Great Britain was to defeat Napoleon. Pitt hoped to raise at least £10 million with the tax; instead he saw a return of £6 million, but had established a precedent that many governments adhere to today.

Moses and Catherine’s 2nd Daughter was born about 1802.
They named her Phoebe Luke.
Phoebe, was christened on the, 7th November 1802, at St. Andrew’s, Mottisfont, Hampshire, England.

Moses and Catherine had another Daughter, whom they called Christian Luke.
Christian, was born on 17th May 1808, at Lockerley, Hampshire, England. Christian was christened on the 17th May 1808, at St. John’s, Lockerley, Hampshire, England. She later married Married John Pitt.  John was the Son of Joseph Pitt and Elizabeth Moody.

Moses and Catherine’s 4th Son, was born about 1814.
They named him, Henry Luke.
Henry, was christened on the 15th May 1814, at St. John’s, Lockerley, Hampshire, England.  He later married Elizabeth Burnett or Elizabeth Southwell, in the July/August quarter of 1845, in the Romsey district, in Hampshire, England. 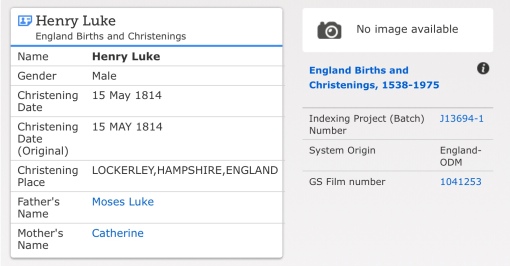 Moses and Catherine’s last and 9th Child, a Daughter was born about 1820 at Lockerley, Hampshire, England.
They named her Susan Luke.
Susan is my 3rd Great Grandmother.
She was christened at St. John’s, Lockerley, Hampshire.
She married Charles Hatcher, son of William Hatcher and Mary Roude.
You can read all about her hard life, here and here. All in all she was a pretty incredible lady, who had an extremely hard life.

The 1841 census was taken on the 6th June 1841, which shows,
Moses, residing at, Butlers Wood, Lockerley, Hampshire, England, with his wife Catherine and daughter Susan Luke (Hatcher). Moses was working as an Agricultural Labourer.

I wonder if Moses was part of the Railway boom that happened in 1841, when the railroad industry swiftly expanded. Moses was of working as an Agricultural Labourer, so there is a great possibility that he may have helped build/ lay the railway that runs through Lockerley. 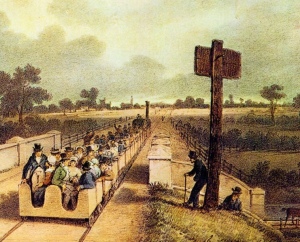 Moses’s Wife, Catherine Kitty Luke Nee Mason, died on the 16th July 1841, at Lockerley , Hampshire, England, when she was 72 years old. She died from Natural Decay. Moses Luke registered Catherine’s death on the 20th July 1941. He signed with an X.

I believe Catherine would have been laid to rest at St. John’s, Lockerley, Hampshire.
This has yet to be confirmed. A trip to the records office is in order.

1842 saw the country go on strike, as sympathy for coal miners fighting against wage cuts, spread to other coal mine, factories and mills throughout England.
Times would have been hard but I’m sure the sense of community and pride was kinda exciting.

1843, brought great sadness to Moses and his family, when his Son, William Luke, died.
He died in the January to March quarter of 1843, in the Romsey district.

Shortly afterward, Moses himself drew his last breath, at Lockerley, Hampshire, England.
Moses died on the 16th October 1844, aged 88.
He died from Old Age.
His Daughter, my 3rd Great-Grandmother, Susan Hatcher Nee Luke, registered his death on, October 17th, 1844.
She signed with an X.

Although I do not know, all I wish to know, about Moses, I hope that he was laid to rest, in his local church grounds, at St. John’s, Lockerley.
It is nice to think that he could be only a stones throw away from my home in East Dean, Hampshire, alongside his daughter Susan Hatcher Nee Luke.
I hope that where ever he is, be it heaven or he’s been reincarnated and living life in the modern world, that he’s at peace. 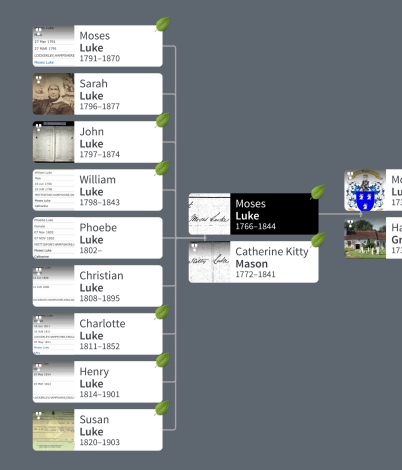 I have brought and paid for, all certificates throughout Intwined.blog.
Please do not download or use them without my permission.
Thank you.