I often talk about those tricky ancestors whom like to play a good old game of hide and seek, well this weeks ancestor is one of them, from different dates of birth to places of birth, and constant name changes, she’s not the easiest to pinpoint.
And even though I can’t be 100% certain about a few details, she definitely not boring to research and keeps me on my toes. It would be rather frustrating if everyone life’s just fall in my lap, without my having to put the pieces of the puzzle together.
I find that the harder I have to delve, the more connected I become to that ancestor.
As I’ve said before the Money, the O’Connor and the Kirby family’s of my Maternal tree are all mind boggling and at times more than frustrating but with that said, they test me to new limits every time I try to discover a little more about them. They help me grow my research skills, as I try different methods to try and find the smallest details about their life’s and lifestyles and even though they have broke me on many occasion, my will does not subside, it only grows.
This week you will hopefully see how tricky, family research can be, that risks have to be taken in hopes you will succeed in the end. That money needs to be spent to clarify certain information. Family research is one expensive hobby especially if you want to get it right.
The monthly subscriptions alone aren’t cheap and with added costs for certificates or military records, dna test, etc, etc it soon leaves you purse or wallet empty. Though I do not mind spending the little pocket money I have on buying certificates and paying for my subscriptions, I hope that when my days are done, that all the time, hard work, money and love I have put into documenting our history, will be cherished by my descendants and won’t be tossed out with the trash.
Talking about money, it’s my Money branch of our tree that I’ve revisited this week and I would like to share with you the life of my 3rd Great Grandmother Alice Maria Money.
So without further ado, I give you a snippet into her life.

So yesterday I ordered the next possibility. It should arrive late next week so hopefully I will be able to update you with the correct information. Fingers crossed. 🤞

On the 7th April 1861, Alice Maria, was residing at Number 4, Shepparton Street, St Mary’s, Islington, England, with her Father John, her Mother Mary Ann, her Aunt Elizabeth Money and a border Eliza Sharman.
John was working as a Plumber Master, employer of 1 man, 1 boy. Alice is named Maria on this census. 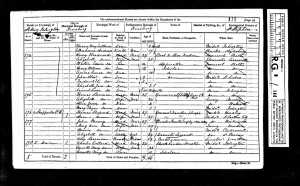 Ten years later and the next documentation I have for Alice Maria Money is the 1871 census, which shows Alice Maria residing at, Number 4, Grange Road, Islington, Middlesex, England, on the 2nd April 1871. She was a Domestic Housemaid for Jane Pegg. Once again she was named as Maria. 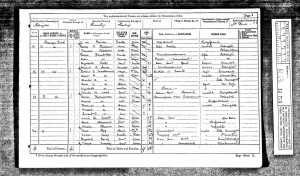 In March 1877, Alice Maria was a Dressmaker and was residing at Barnsbury Street, Islington, Middlesex, England.
Alice was heavily pregnant and single.

On the 22nd March, Alice, gave birth to a son, my Great, Great Grandfather at, Clerkenwell Workhouse, London, England . She named his Harry Herbert Money.
Alice registered Harry’s birth on 28th March.
No Father was named on the birth certificate.

Their Adobe was given as the Workhouse.

In the August of 1879, Alice had moved residence, to Number 29, Nichols Street, Horton Old Town, Shoreditch, Middlesex, England.
She was working as a Domestic Servant and once again was heavily pregnant.
From what I can gather online, Nichols Street, which I believe is now called Old Nichol Street, Shoreditch, was the worse of the Victorian slums. How awful it would have been to live in the slums of London. We really don’t know how lucky we are. 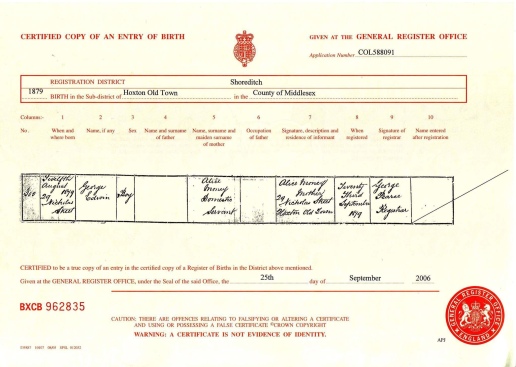 The 1881 census shows that Alice, and her two Sons, Harry and George were boarding at, Number 29, Nichols Street, Horton Old Town, Shoreditch, Middlesex, England.
A man named William George Willats was visiting.
Through dna I can now confirm that he is/was the Father of Alice Maria Money’s Children, Harry and George.
William George was working as a Commercial Traveler aka salesman. Alice Maria was a Dressmaker.
Alice and William were using their middle names, Maria and George. 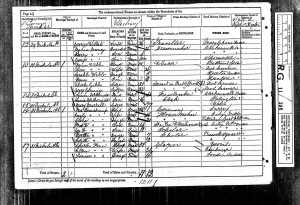 Alice’s father John Money, died on February 9th 1882, when he was 68 years old at Number 119, Shepperton Road, Islington, Middlesex, England. His cause of death was from Paralysis, 3 years. John’s nephew J Martin registered his death on the 11th February 1882. John’s profession was given as House Painter on his death certificate. 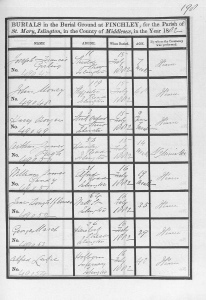 Alice was pregnant and had a third Son, shortly after her father died.
She called him Arthur Richard Money.
Arthur Richard Money/Willats was born on the 1st May 1882,  at Number 24, Chatterton Road, Islington, Middlesex, England.

Alice Maria Money, married William George Willats, at The Register Office, Islington, Middlesex, England, on December 23, 1882, when she was 26 years old. Alice was a spinster and William was a bachelor. William was working as a Commercial Traveller. Alice was residing at, Number 3, Monsell Villas, Monsell Road, Islington and William at, Number 61, Ambler Road, Islington. Their witnesses were Eliza and Amelia Willats. 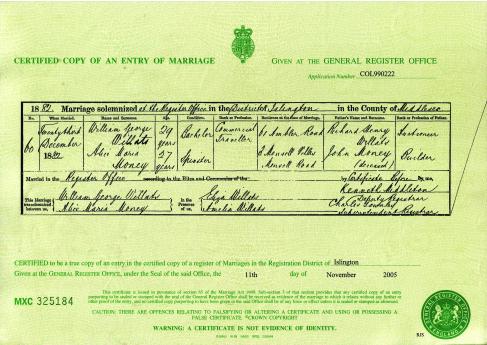 Alice’s Mother Mary Ann Money nee Skelton, died in the January-March quarter of 1885, in the Poplar district. I have ordered her death certificate, so please keep an eye out for updates.

Alice gave birth to her first Daughter between the months of July and August 1887, in the Edmonton district.
Alice and William named her Daisy Jean Maria Willats.

Poppy’s Father William, was working as a Bailiff and House Agent. He registered Poppy’s birth on the 25th March 1890.
I do have a copy of her birth certificate but feel it wouldn’t be right to share it as I was kindly given a copy  by a distant but lovely relative.
You can order a copy with the below information. 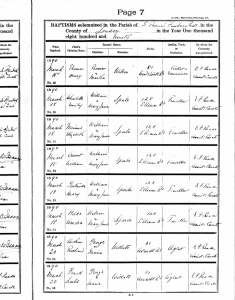 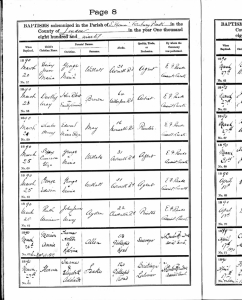 Her Husband, William was working as a Agent. They occupied 2 rooms.

Alice gave birth to her 3rd daughter, Lily Milly Hilda Willats, in the January-March quarter of 1893, in the Islington district.

Alice and William baptised their daughter Lily on the 16th February 1893, at St. Thomas, Finsbury, Middlesex, England.
William George was working as a Bailiff.

Their adobe was Lillieshall Road.

Heartbreak followed a few short years later, on February 14th 1897, when her Husband William George died at home, Number 44, Gillespie Road, Islington, Middlesex, England. He was only 43 years young.
William died from, Cerebral Haemorrhage Coma Syncope. This Sister Charlotte Crosby’s nee Willats, was present at his death and registered it on the 16th February 1897.
Williams occupation was given as Estate Bailiff. 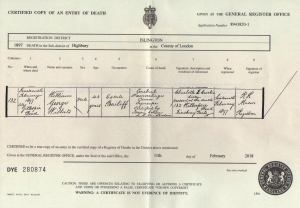 Alice Maria, buried her Husband, William George Willats, at Abney Cemetery, in grave 092431, on the 18th February 1897.
Their adobe was, 44 Gillespie Road, Islington, Middlesex, England.
William was buried with his Mother, Eliza Willats nee Cameron, who died at the age of 59 and was buried on the 29th November 1894.

Alice Maria Willats, was residing at Number 54, Canning Road, Islington, Middlesex, England, on the 31st March 1901, when the census was taken.

Her Daughters, Daisy, Poppy and Lillie, were residing with her. Alice was living off her own means. They also had a lodger called Sophia H Taylor and a niece called Alice B Daylor, residing with them. 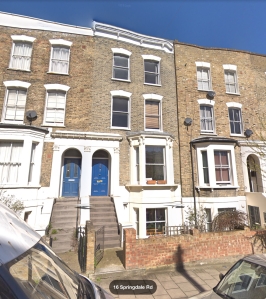 The census states that she has been married for 36 years, she has had 7 children, 6 living and 1 whom has died. No occupation was given. Her Daughter In Law, Eleanor Mary Willats nee Kirby and Eleanor and Harry Herbert Willats Children,  Harry Richard Thomas Willats and Reginald George Wilfred Willats were residing in the same building. I have no idea where Harry Herbert was, as I can not find a census return for him.

Over the next few years, Alice’s lost a few more of her children, one being my Great, Great Grandfather. She welcomed, new Son and Daughter In-laws, as her children married and became a Grandmother to lots of children.

Alice Maria Money died on April 9, 1934, at Hill House, Minster, Thanet, Kent, England, which was, The Workhouse in Isle of Thanet, Kent.
She died from Hypostatic Congestion of lungs, due to injury to her right hip caused on the 9th February 1934, when she fall on the floor in her residence, Number 15, Vicarage Street, St Peters, Broadstairs Thanet. 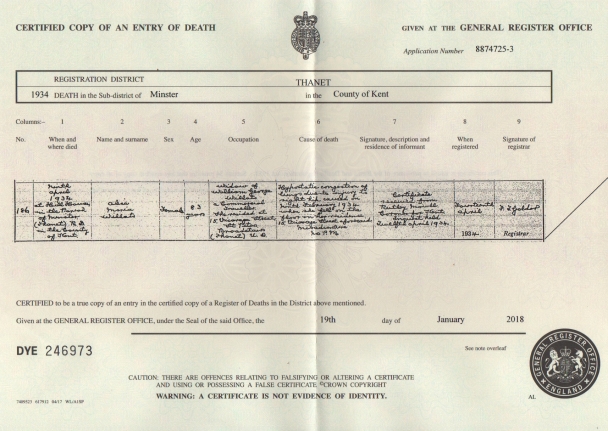 I am still desperately trying to find her resting place, unfortunately I haven’t managed to yet. To me personally, it’s very important to know where she lays.
Though I know she will not be close, and visiting her grave will mean a road trip, I just feel I need to know where she is. I wonder if it was in the grounds of Hill House Workhouse/Hospital. Of course, if I find her, I will share my findings with you.

I have brought and paid for all certificates throughout Intwined.blog. Please do not download or use them without my permission.
Thank you.

Bring the outside in. Seasonal Inspiration for interiors & gardens