If you read Stacey’s guest blog, “Your feet will bring you where your heart is”, you may remember that she has been in contact with Co. Kerry library and they have kindly been looking into our, John Cornelius O’Connor, for us, in hopes of tracking his roots down.
Stacey and I were extremely excited when she received an email, with a few possibilities.
Co. Kerry, library, located a family of a John O’Connor, listed as a 32 year old Dock Labourer, in the 1881 UK Census.  He was born in Ireland, and living at, Number 77, Scott Street, Plaistow.  His wife’s name is given as Anne (born in Middlesex), and three children, John (8), Thomas (3) and Anne (2).
John Junior’s place of birth is given as Woolwich, Kent, which may fit with the idea of having been born at sea and registered his birth at place of arrival, i.e. Woolwich Docks).
Co. Kerry library, also found a marriage of a John Connor (son of John Connor) and Mary Curtin (daughter of Timothy) in Castleisland records for 1867, but no children show up to that couple in records there, so it is possible that they moved on.  Cold she have died in childbirth, and John remarried to Anne? (I still have to look into this)

With this information at hand, we set about researching the John O’Connor, whom was showing up in the 1881 census, mentioned above.
I tracked it down pretty quickly and it all looked rather promising, as the only person who seemed to be missing was Rose, John’s Sister, who may not have been born yet, I believe she was born about 1880.
Also the Mothers name was listed as Anne, and we believe/think she was called Mary. Of course she could have been called Mary Anne and could have been using her middle name.
Another questionable fact was, John’s Fathers occupation, being a Dock Labourer. From John, Anne’s and Rose’s marriage certificates, we know that he was a Master Marine and a Carpenter.
Off course he could of worked in the docks due to leaving Ireland and finding a job, which wasn’t always easy as the Irish were not loved by everyone. A job’s a job, at the end of the day, if it pays the bills, keeps a roof over their heads, food in their belly’s and clothes on their backs, it doesn’t matter the title. 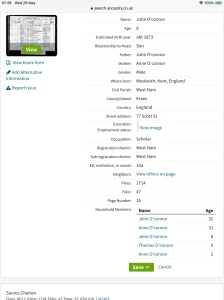 The next step was to find and order the matching birth certificate and wait for it to arrive in my inbox.

With the certificate ordered, I tracked down Thomas’s birth and also a baptism for him.
I held off on ordering Thomas certificate, just to be safe, especially since the price of certificates has increased.

I also found a birth index record for Anne and once again held off ordering, but was ready to order if the birth certificate from John was the right one.

Getting a little ahead of myself, I decided to look into the Woolwick John and came across a very interesting document.
This John O’Connor was on the convict list for Larceny, in 1896.
His occupation fits to our John Cornelius O’Connor’s occupation, later in life.
What I found absolutely fascinating about this document was, the great deal of detail about his appearance.
This John O’Connor, was 5ft 6, without shoes, had a dark complexion. He had black hair and brown eyes.
He also had a dot on his third index finger, a long scar on the end of his nose and right jawbone. A dot, women on ball and two wings on his left arm and a star on his left wrist and wreath on his right wrist also a ship and crown on his right upper arm. 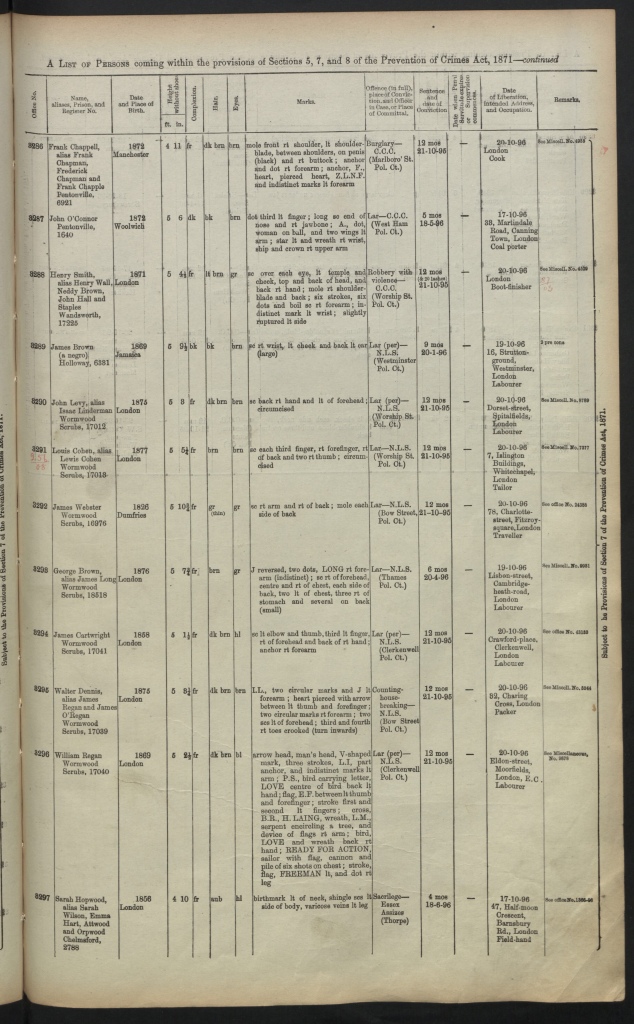 If this was our John, it may explain his move to Canada but I was secretly hoping it wasn’t, as I really didn’t want to tell my Nan that her, deeply loved Grandfather had been sent to prison for 5 months.
A few days later, the birth certificate was waiting to be viewed and downloaded.
I must admit I felt sick to the stomach, could all those years of hunting for him be over.
Was the answer to our unanswerable questions be waiting for me in a black and white scanned document.
Would I have to break my Nans heart by telling her the he had been a little naughty in his youth.
I braved downloading it and my heart sunk, it wasn’t him.
Even though most of the information could possibly be right, even the Fathers name being Patrick, fitted in with Anne’s and Rose’s marriage certificate but the date of birth is off by a mile, as we know for sure that he was born on a leap year, on the 29th February.

I have very mixed feelings about finding out, another lead has been blown to the wind and that our Irish roots still tease us at every possibility.
In truth I’m a little relieved that it isn’t him, not because he was a petty criminal but because the hunt, the dedication, the longing isn’t quite yet over.
Although saying that, how I wish I knew everything there is to know about our master of hide and seek, John Cornelius O’Connor.
The hunt will continue even though I’m sure, we will take one foot forward, and a trillion steps back, over and over again.
I’m determined to get there though. 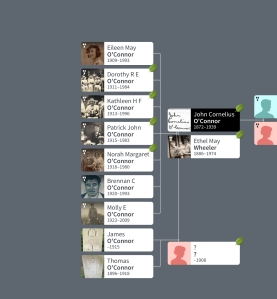 I have brought and paid for all certificates throughout Intwined.blog. Please do not download or use them without my permission. Thank you.

One thought on “John Cornelius O’Connor – The Hunt Continues.”