A blazing flame of passion often dwindles to a flicker even though the passion never initially fades, it’s there patiently waiting for something to spark the flames back to a roar.
The Havana Afghan, was the spark I needed to relight my crojo.
As soon a saw a preview of this blanket many months ago, I knew I had to make it, more so I wanted to make it, needed to in fact.
I haven’t really felt that way for a while, I was making because, I had to and even though every creation was a pleasure, those flames of passion were just not as they once were.
When Havana was released I basically stoked the Pippin crochet group on Facebook. My news feed was full of beautiful colours and breathtaking blankets which relit my passion with a force and I knew that I had to start my own and there really wasn’t any stopping me.
With yarn picked out and ordered, which honestly took a month of Sunday’s, buy boy wasn’t it fun, I couldn’t wait for it to arrive so I could drop everything and begin my own Havana journey.

The Havana CAL was designed by the talented Tinna Thorudottir Thorvaldar, as a crochet along held by Pippin Crochet Club, on Facebook.
Havana was a free pattern during the cal and was released in 8 parts, 1 section of the pattern being released each week.
There are 7 different mosaic pattern sections to make for the body and 3 different borders to choose from, a plain border double-sided border, a twisted fringe border or a stunning mosaic double sided border, that can be made in two different size, to finish off your afghan to your own perfection.
Tina’s original Havana is approximately 140 cm x 110 cm large, without the border, using the recommended yarn weight.
148cm x 118 cm, with the small border, or 155cm x 125cm with the full border.
The great thing about the Havana blanket, is the double border which hides all those pesky ends and saves you weaving them in. How I dislike weaving ends in!

I chose to use Paintbox Simple Aran, from Love Crochet, using the following colours.

I also decided to only make 2 repeats of each mosaic section and start with fewer chains, as I wanted to make a lapghan.
I started with a chain of 147, using Slate Grey.
I started the crochet along, pretty late. The cal was already on part 6, so I had to play catch-up.
Following the pattern with only two repeats, I used the following colour order.

I caught up pretty fast and was ready for the border release.
Lots of people on social media, were saying how hard it was, which put the fear of god into me, so I packed her away and worked on the, Little Prince Charming Afghan, by Vanessa at Hooked on Sunshine, which you can read all about here.
Time then became against me, so I had to man up and get on with the border.
And I’m so glad I did, because it wasn’t at all hard, just a little fiddly in places, but so very worth it.
I went with the simple border, as time was seriously not on my side, I had to finish ASAP.
For the first slip stitch round of the border, I used Tomato Red and my 5mm hook.
I change to a 4.5mm hook for the rest of the border and made
3 rounds of double crochet for the front and back border, using Slate Grey.
For the last round, which joins the two borders, I continued to use, Slate Grey and my 4.5mm hook. 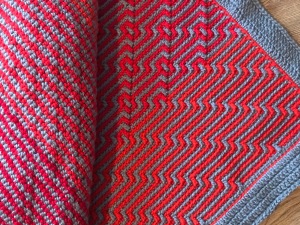 As I stitched the last stitch, a sadness washed over me, my Havana journey was over. 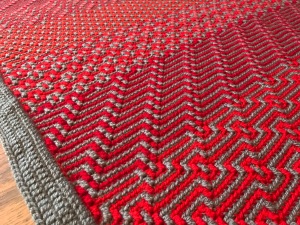 I would have loved to have made the full mosaic border and feel a little disappointed that I just couldn’t in the time frame I had to work with, if only I hadn’t let fear get the better of me. 😤
I will 100% be making more Havana’s in the near future and I will definitely make the full border on those, it would be a crime not to!

My Havana ended up using 16 skeins of yarn, costing £47.84.
I used the following amounts in each colour. (skeins rounded up)

Havana has been so much more than stitches entwined together, it’s been a project of passion, that relit my fire, it’s been an absolute pleasure.
It’s given me a little faith, that even when fear is nagging, you should try anyway, because the things that you dread, becomes the most beautiful journey and give you that wonderful feeling of 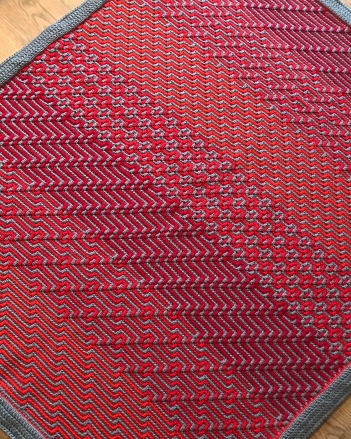 With Havana over and ready for its new home, I’m excited about my next adventure with another of Tinna’s patterns, the gorgeous Indian Afghan. 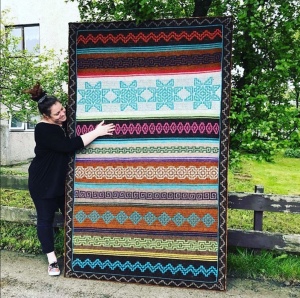 Isn’t it absolutely gorgeous.
You can find The Indian Afghan here.
And also all Tinna’s other breathtaking patterns here, her YouTube channel here, her Flickr account here and her Instagram here.
If you can’t crochet, it’s well worth learning, just to be able to make Tinna’s patterns.

Until next time, happy hooking.